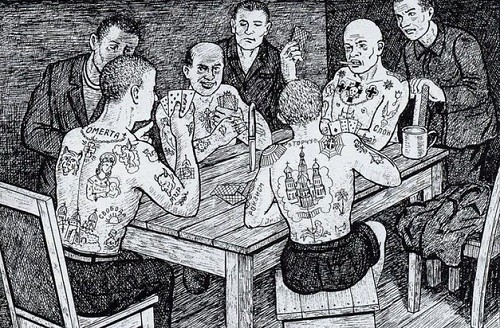 There’s something about a tattoo with meaning: the metaphorical compass that reminds you to follow your own path or the anchor representing your desire to be steady on your course, despite the waves. Criminal offenders in Russian prisons have meanings to their tattoos, too, but they’re far less inspirational. And they’re earned. There are rules to their ink…and consequences. Russian prison tattoos can get you killed, if you survive the process of getting one at all.

The Practicalities of Prison Tattoos

For starters, how do you get the equipment and ink you need for a tattoo in prison? You can’t sneak it in; the stuff is contraband. The solution, instead, is a marvel of human ingenuity. To make ink, prisoners burn pieces of their boot sole rubber down to a black soot in their meal bowls during yard work so they’re less likely to be noticed – or smelled. 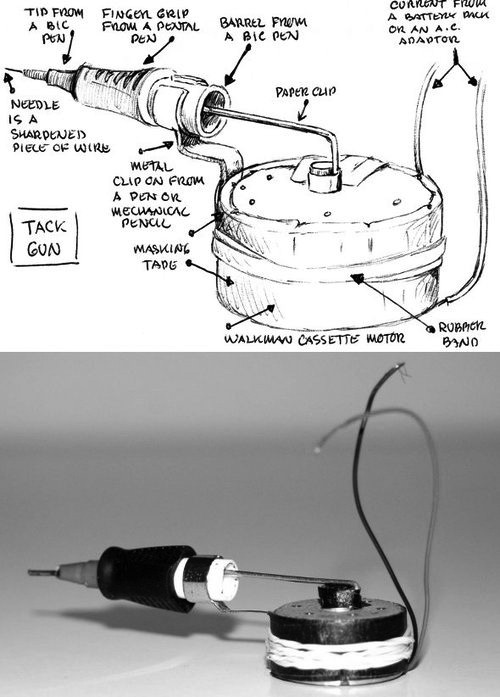 The powder is then mixed with a liquid, usually either alcohol or the urine of the person being tattooed (it’s believed to have antiseptic qualities) and the mixture is strained through a bed sheet. Bit of trivia: It’s believed that using another guy’s urine for your tattoo ink will turn you into a homosexual. Seriously. And though rare, honey-based dry watercolor paste is sometimes used to create color ink.
So now that we have our ink (with or without the urine) we need a device, and there are a number of ways that Russian prisoners build tattoo machines. Rigging a sharpened needle or pin to a pen or the motor of an electric razor are options, while others might prefer to use a stick-and-poke technique. During the first half of the 20th century, the clockwork shaving machine known as Sputnik was commonly modified into a tattoo machine because it didn’t require electricity. Today, maybe the most popular option involves cutting the head off an ordinary toothbrush, melting the handle to form an angle, and attaching the motor from a walkman or tape player. A pen cap fitted with a needle made from sanded and sharpened guitar string, also known as a claw, is then attached to the machine using parts from the pen and a lighter. While not at all sleek, these machines are beautiful in their inventiveness.

Finding the right tattoo artist can be tough from behind bars, too, and prisoners have been known to try to transfer prisons to get closer to a talented tattooist or ‘pricker’.

The Penalties of Russian Prison Tattoos

Well-executed tattoos are coveted in prison, but in Russia, pornographic images, the obvious rat, and a number of other designs are commonly applied against a prisoner’s will as a form of punishment by fellow inmates. These images are considered ‘lowering’ in the language of Russian prison tattoos and reduce a person’s status. The worst of these is a heart inside a triangle, a symbol reserved for those who mistreat children, and a mark used to identify pedophiles, despite possible transfer, for constant torment.
An influx of drugs into the Russian prison system during the late 80s and early 90s created an internal economy in which tattoos could be bought, where they previously had to be earned. Purchased or not, a tattoo that isn’t earned still implies misrepresentation and the wearer, if found out, could be forced to shred it with broken glass or grind it off with a brick – or face severe beatings, rape or even death.
If the ink itself doesn’t kill you, lying about what you’ve done or sporting the wrong symbol in this criminal counterculture will.

The Meanings Behind Russian Prison Tattoos

Things are not always what they seem when it comes to the tattoos of Russian prisoners. Tattoos you might interpret as highly religious or political can actually represent theft, survival, and time served. According to Damon Murray, the co-founder of Fuel and publisher of The Russian Criminal Tattoo Police Files, “Symbols of churches and crosses don’t represent the person’s belief in God, they represent the thieves’ cross or the domes of the churches represent sentences served.” 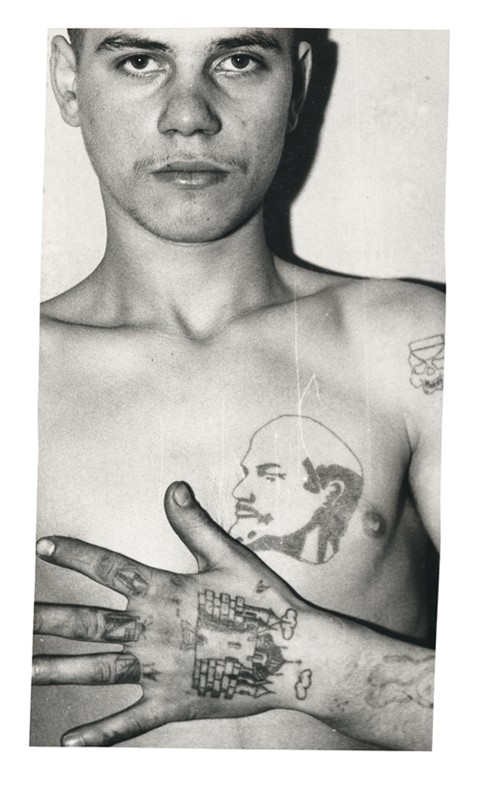 And while tattoos of Stalin and Lenin have been notably popular, especially on the chest, their appearance isn’t necessarily political. Prisoners believed that the guards would not dare shoot even a representation of their beloved leaders so they would tattoo images of Stalin or Lenin on their chests to avoid being shot. To their dismay, a number of inmates found themselves executed anyway, through the base of the skull.
Stars on the knees are an open declaration that the person kneels before no one, inmate or guard. Stars on the shoulders are earned by confronting and attacking guards. 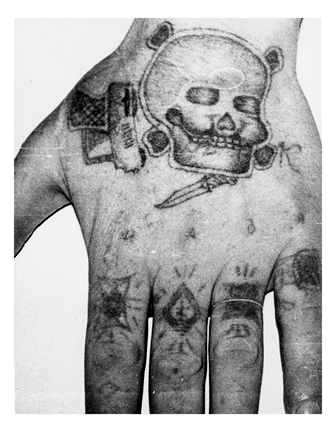 A skull tattoo on a hand or arm identifies which side the wearer prefers when killing and numerous skulls of the fingers are used to tally murders.
Bells indicate that a prisoner is not eligible for probation due to a serious crime and are automatically respected.
Eyes have multiple meanings, depending on where they’re tattooed on the body.  Eyes on either side of the chest, just below the shoulders, attest that the wearer’s tattoos were never done by force. Having them on the lower back means that the prisoner was ‘used’ sexually. And eyes just below the hips represent a criminal demotion within their gang.
Spiders are used to recognize thieves and are not seen as negative but if you steal from your fellow inmates, they may forcibly tattoo a rat on you – and nobody likes a rat.
Cathedral domes represent completed sentences. A cathedral on the hand, arm or wrist represents a sentence of more than five years. 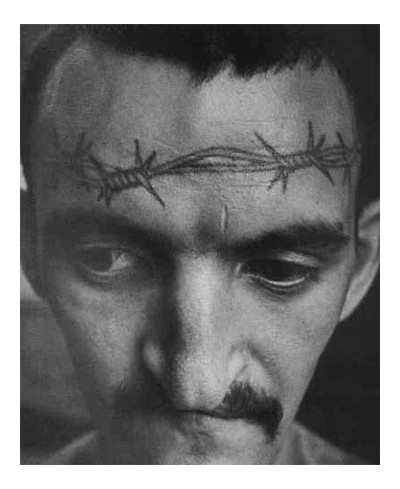 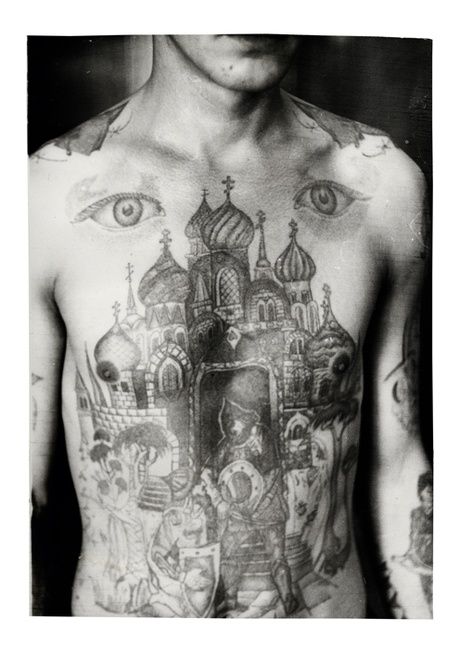 A life sentence is often tattooed as a crown of barbed wire along the forehead. When barbed wire is tattooed anywhere else, the number of barbs represent the years of the sentence.
Butterfly tattoos (believe it or not) indicate that a person can be trusted and may also be an escape artist.
A tattoo of a knight or soldier tells your fellow inmates that you’re a sadist and may be working as an “executor” of your group or gang by killing inmates at their request.
A dagger through the neck means the person is a murderer, as does a skull with a knife through it.
Flowers wrapped in barbed wire or crossed with a knife attest that the wearer was arrested before they turned eighteen. The image of Madonna holding the baby Jesus indicates that the person became involved in crime at an even younger age. 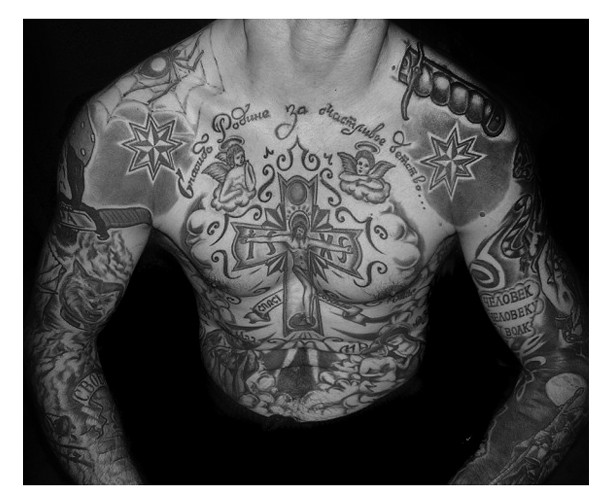 Russian criminals aren’t the only group to use tattoos to create a visual (yet sinister) resume, but they are probably the most extensively documented. In 2004, a three-volume encyclopedia of Russian criminal tattoos was published based on the photographs and drawings of over 3,000 tattoos collected by Danzig Baldaev, a prison attendant.
Sergei Vasiliev, a former staff photographer for the newspaper Vecherny Chelyabinsk of thirty years, is the photographer behind many of the images of Russian prisoners, including some used in this article, from Russian Criminal Tattoo Archive.
Later, the work of criminologist, Arkady Bronnikov, was used to publish The Russian Criminal Tattoo Police Files in 2014. And in 2016, Mark Bullen, a Russian-speaking, British police officer who studied and worked in Russian crime, published Theif in Law based on his research and photos from his personal archives.
In addition to these books, you can also learn more about the meanings behind Russian prison tattoos (as well as the Mexican Mafia, Bloods, Crips, Hell’s Angels, and more) in The Canada Border Service Agency’s Organized Crime Tattoo Handbook, which is (believe it or not) free to read online.