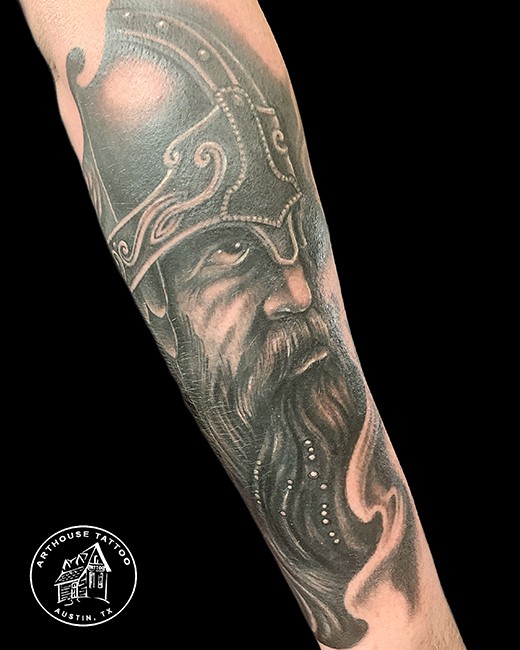 How the Series Vikings Contributed to the Popularity of Nordic Tattoos

Unless you have been living under a rock, you probably noticed that the British seriesVikingstook the world by storm at a time where there was already a growing interestin this group. This historical fantasy series is full of drama and wild battles, but it also has one very important part of Viking culture: tattoos. Given our line of business, we find this pretty interesting—and we also think that it has inspired more people to get Norse tattoos, too. Let’s talk about that.

What We Know About Viking Culture and Tattoos

Any fan of the show knows that tattoos are present on most of the characters, but that isn’t just a director’s touch. The real reason that all of these characters have these tattoos is because, in Viking culture, tattoos are actually a big part of society. Vikings had a deep, historically recorded love for tattoos, and it played a big role in their identities.
Vikings were a deeply committed people, and they were proud to show it. Historically, Vikings used tattoos to paint a clear picture of what they were committed to. They paid their respects to Gods like Odin using tattoos, but their tattoo culture also went much deeper than that. Viking tattoos were used to tell stories and show the kind of life a person lived whether they were a fighter or a farmer.
Funny enough, the Vikings didn’t really tell us that they had tattoos. Most historic records surrounding tattoo use for these people come from other cultures documenting it. Other people from around the world saw the tattoos and found them interesting (much like what is happening today), so they left behind written descriptions of their appearance.
These brave warriors used Norse tattoos to demonstrate their strength and power, but they also used them to demonstrate their commitment to family and the Viking way of life. Vikings used tattoos in a way that is comparable to how a lot of us use them today, even though the style and subject matter might have changed.

How Vikings Made Them More Popular

As tattoos artists, there are few things that we like more than well-placed and well-drawn tattoos—and this show does have fun with it. Though it isn’t completely accurate, it still fits well within the show and makes them look nice.
Whether it is the Tree of Life tattoo on Ragnar’s head that speaks deeply to the stories of his people, or the Runes that give praise to Odin and other Gods from Norse mythology, these tattoos are certainly interesting Fans have noticed, and some of them are rushing to get tattoos from the different seasons too. People really enjoy fandom tattoos, but some people want something a little more authentic.
The real benefit that Vikingsbrings to these tattoos is that it makes people curious. Even though theshow isn’t completely accurate, it can certainly inspire curiosity. More people want to know about the Vikings that inspired the show. For this reason, they are more likely toexplore the true art and tattoo styles associated with Vikings, which is great for building more interest and bringing this popular style back into the spotlight.As people learn more, they see how these tattoos and this style of art can apply to their own lives. For some, a Viking tattoo can be deeply personal, regardless of their background.

Vikings is a great show, and we like that it is an opportunity for fans to learn more about such an important culture.We enjoy the rich and daring history that inspired it in the first place and would absolutely encourage you to learn more if you’re interested. We don’t care if you want a tiny version of Thor’s hammer, or you want Ouroboros eating his own tail. We are happy to have you in our shop.